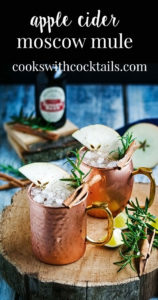 Spice up your holiday with this apple cider Moscow mule.  Its full of delicious ginger and apple flavor, made with an apple whiskey, apple cider, fizzy ginger beer and plenty of freshly grated cinnamon.

Perfect for sipping around a bonfire or for getting your party guests into the holiday spirit.  Refreshing and full of fall and holiday flavors, this twist on a Moscow mule is our favorite yet!

If you have the time or the ambition, make this cocktail even better with homemade apple cider!  Here is a link to our favorite homemade apple cider recipe.   It’s easy to make and you can do it in your slow cooker or on the stove.  It will make your house smell AMAZING! 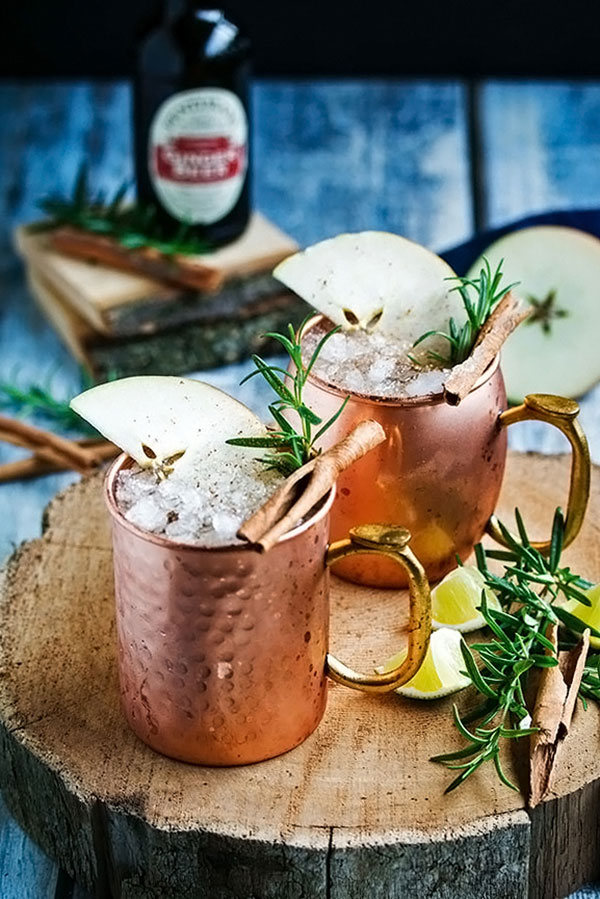 What is an Irish Mule or Kentucky Mule:

An Irish mule or Kentucky mule cocktail is a Moscow mule made with whiskey.

So because this apple cider Moscow mule recipe uses whiskey instead of vodka, its technically called an Irish mule or a Kentucky mule.  But otherwise its the same as a Moscow mule.

You could also use vodka for our apple cider whiskey mule version, if that’s what you have, or an apple vodka, but we found that the apple whiskey gave our Moscow mule an added dimension of almost caramel like flavor and we absolutely loved it!  So did everyone else too!   Kevin doesn’t really drink cocktails, hes more of a beer man, but he asked for another….

What are the ingredients in a Moscow mule:

The ingredients in a traditional Moscow mule are the following:

The ingredients in our holiday apple cider Moscow mule with whiskey are:

A few tips for your apple cider Moscow mule ingredients: 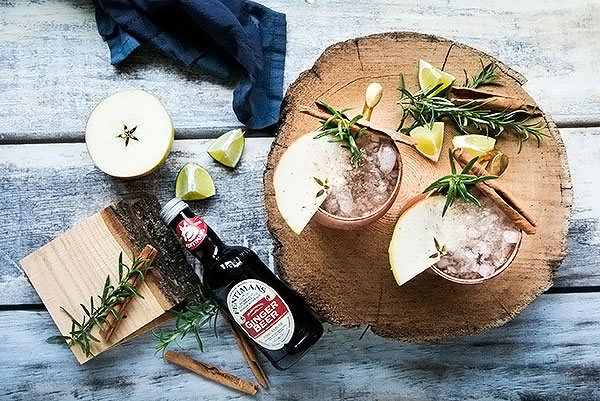 What kind of ginger beer should you use?

There is a bunch of different kinds of ginger beer out there.  Some are really spicy, some are really sweet.  We like one that’s a little bit spicy and not too sweet.  We used Fentimans ginger beer and it was really great in this cocktail.  You can find it at more specialty grocery stores, like Whole Foods, or you can get it here on Amazon.  It’s pretty damn good on its own too, or in our dark and stormy cocktail!

Fever Tree Ginger Beer is another really wonderful ginger beer with a good spicy ginger kick that’s not too sweet.  You can find it at Whole Foods or on Amazon too.

Moscow mules are traditionally served in a copper mug.  Not only do they look cool, they keep your drink cool longer and did we mention that they look cool?!   Just make sure when you are buying copper mugs that they are food safe because copper can leach into your drink and you don’t want that!

These copper mugs are lined with a stainless steel lining which also makes them double insulated.  They are also so pretty!! 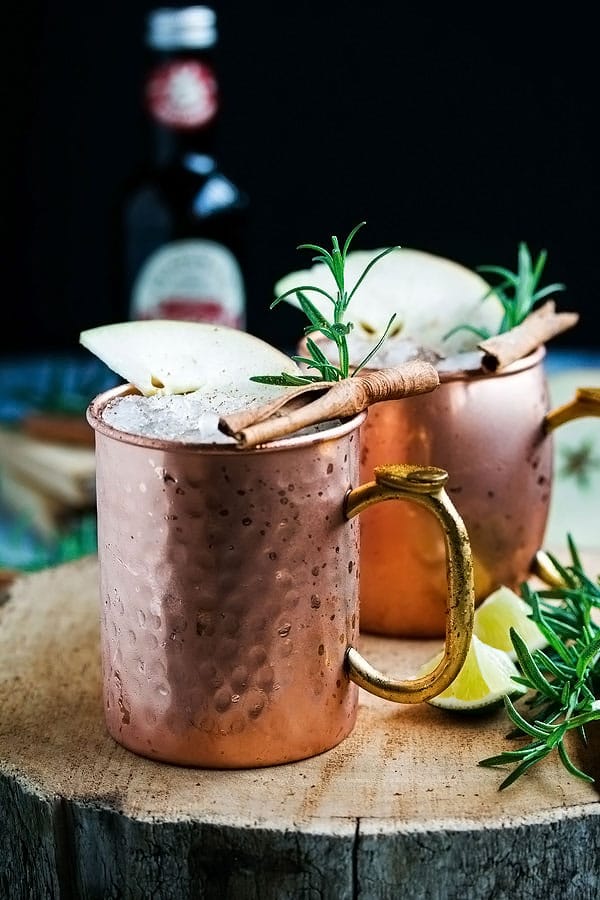 How do you make an apple cider Moscow Mule?

A Moscow mule is really easy to mix up.  Here are the steps:

How to serve this Moscow Mule for a crowd:

If you are having a party and you want to serve this apple cider whiskey mule cocktail to get everyone in the holiday spirit, we have a few tips for you. 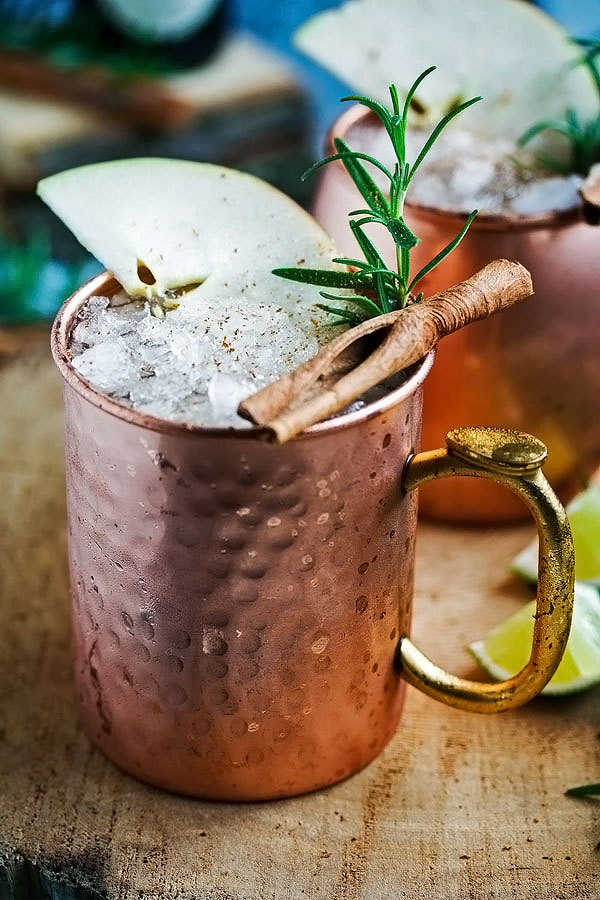 Other cocktails with ginger beer or apple cider:

Here’s a list of other cocktails that use either ginger beer or apple cider.  Any of them would be a great addition to your holiday party! 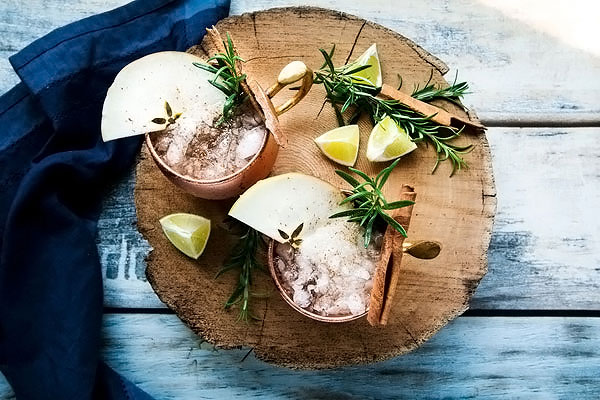 If you’ve tried this apple cider Moscow mule recipe then don’t forget to rate the recipe and let us know how it turned out in the comments below.  We love hearing from you!
To save this recipe for later on Pinterest:
CLICK HERE TO PIN THIS RECIPE FOR LATER!
We love to see your creations!  Tag @Cookswithcocktails if you post a picture of this recipe on INSTAGRAM 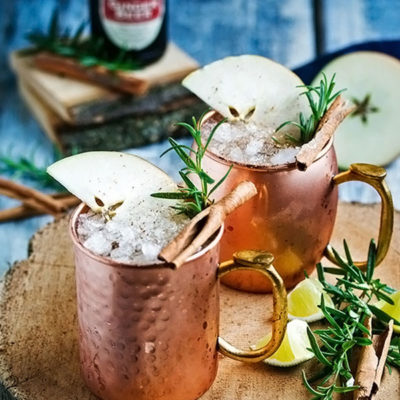