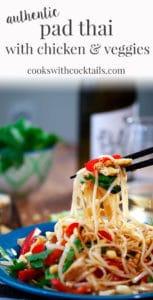 Chicken pad thai made with an authentic tamarind sauce,  tons of veggies and meets all the requirements of a good Thai dish. Sweet, sour, a bit salty and a little kick of spice.  Quick and easy and so much better than take out. 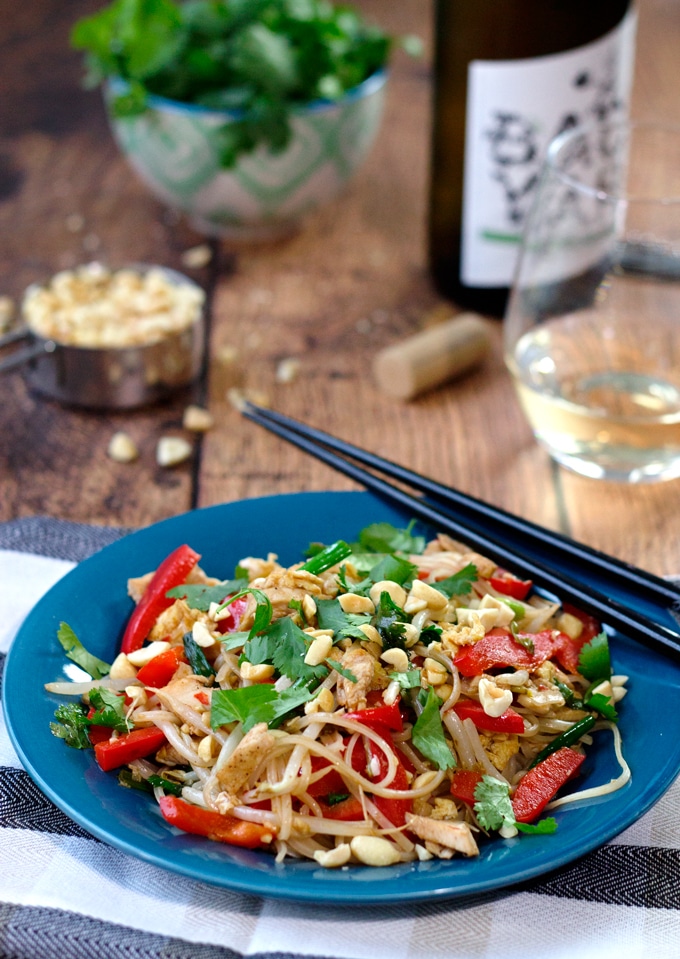 Pretty sure I’ve mentioned before how much I love Thai food.  I love it for a couple of reasons.  One because its so damn tasty, but also because its fresh and clean food that’s full of veggies and really healthy.

I ate a ton of chicken pad thai in Thailand.  Street cooks had a little cart with a big hot wok and all their ingredients around the edge of the wok.  They would whip up a dish for you in a min or two and sell a plate of it for about $1! So freeking delicious!

At first I was nervous about eating food from carts on the street, but after about a week, I gave into the temptation and ate whatever I wanted.  I never even had the slightest bit of an upset stomach the whole time I was there. 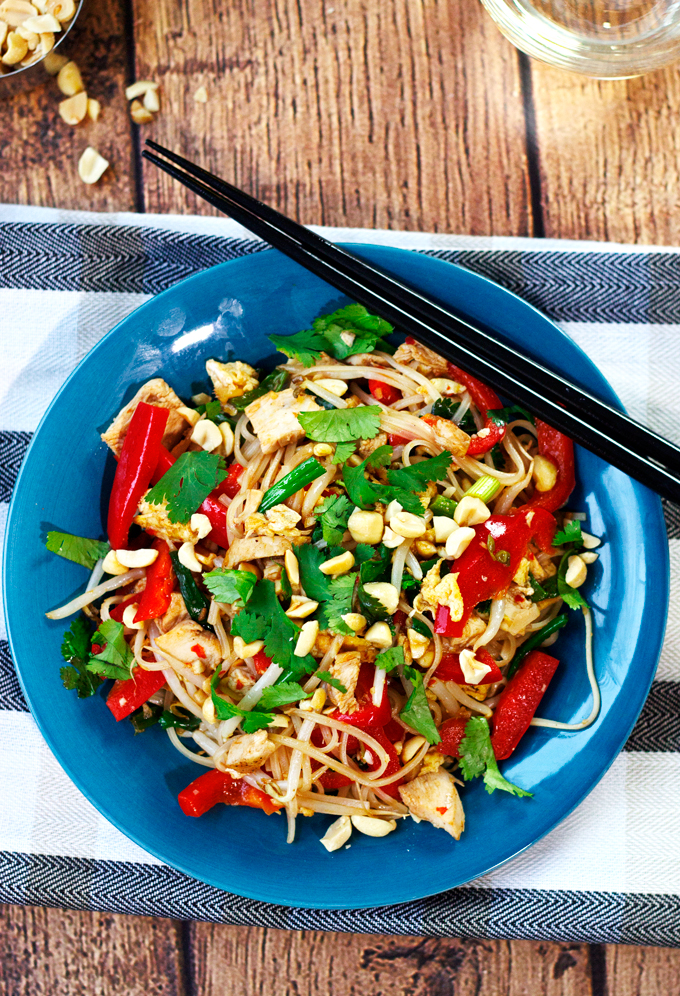 I have tried a couple recipes for chicken pad thai since my visit to Thailand and I haven’t found one that worked for me until now.  Its all about the sauce…!  I’ve seen lots of pad thai sauce recipes using soy or peanut sauce.  Neither of those cut it for me.   They just don’t taste like the pad thai I had in Thailand.

The sauce in this recipe uses tamarind paste, fish sauce, palm sugar, lime, and garlic chili sauce.  It meets all the taste requirements of a good Thai dish.  Sweet, sour, salty, and spicy.

It tastes pretty dang close to the chicken pad thai I got in Thailand. 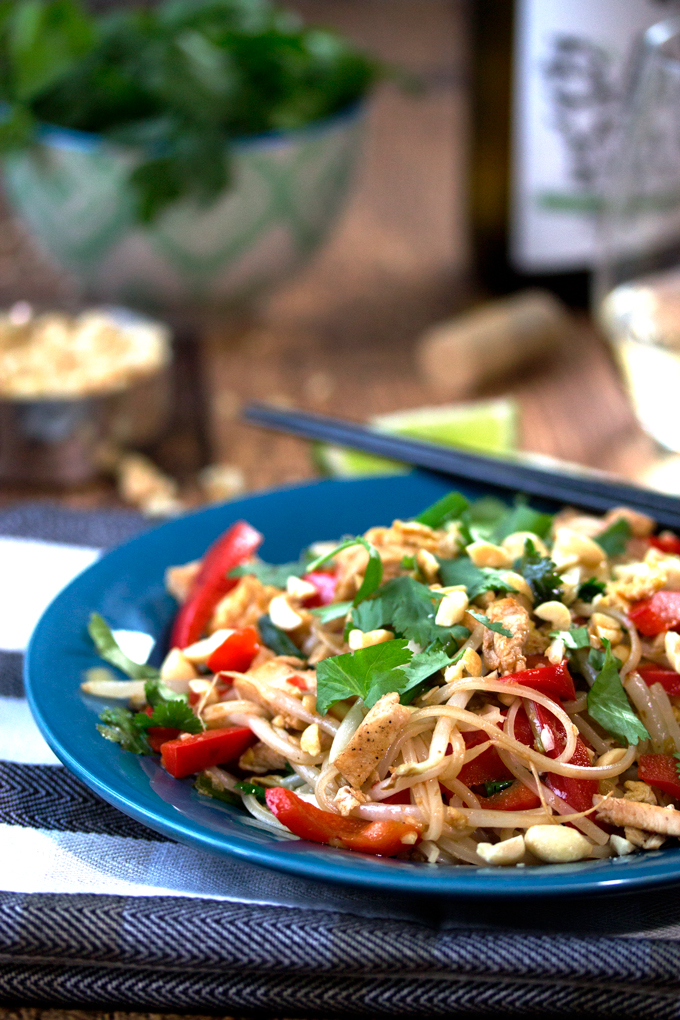 In Thailand, the pad thai I got in the streets and in the restaurants had bean sprouts and maybe a couple slices of peppers for veggies only, but I like to eat mine with a lot more veggies than that.

My favorite combo is red peppers and bean sprouts for veggies in this dish, but I have made it before with broccoli and carrots too.  It just depends on what you feel like.  Any and all taste great, but I think the crunchy and slightly sweet bean sprouts are a must.

If you use broccoli, I find that its best to cut the florets quite small.  And remember, if you add carrots, they need a little longer than most veggies to cook so add them to the wok first and stir fry for a bit before adding the rest of the ingredients.

Don’t forget to squeeze a fresh lime over your plate and spoon a bit of crunchy peanuts on top before you dig in. 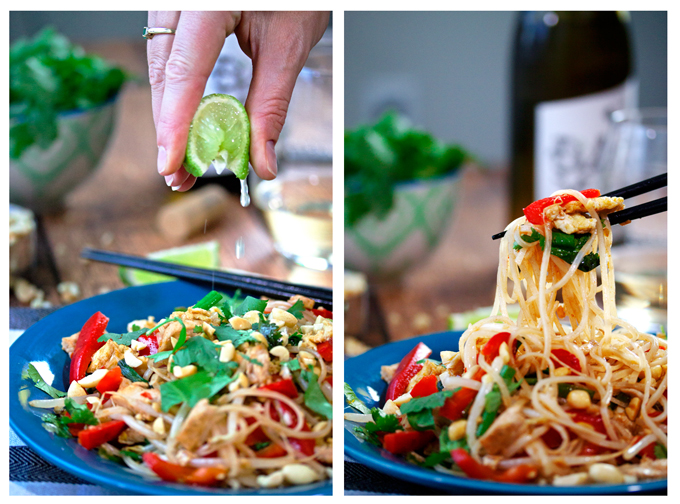 I always make a bunch of my perfect baked chicken breast at once, usually on the weekend, and keep it in the fridge for the week.  Then when I make salads for my lunch or dinner for my family I just have to chop it up and throw it in.

Its very handy and allows  you to make dishes like this (and many others) much quicker as one step is already done for you.

If you’ve tried this Pad Thai recipe then don’t forget to rate the recipe and let us know how it turned out in the comments below.  We love hearing from you!

We love to see your creations!  Tag @Cookswithcocktails if you post a picture of this recipe on INSTAGRAM 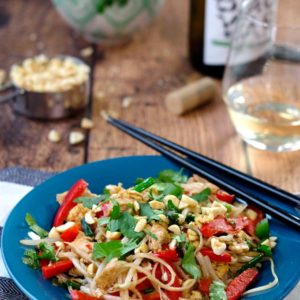 FOR THE PAD THAI