Raspberry margarita with peach made with raspberry puree, peach juice, lime, and a generous helping of tequila make this the perfect blood red Halloween cocktail! 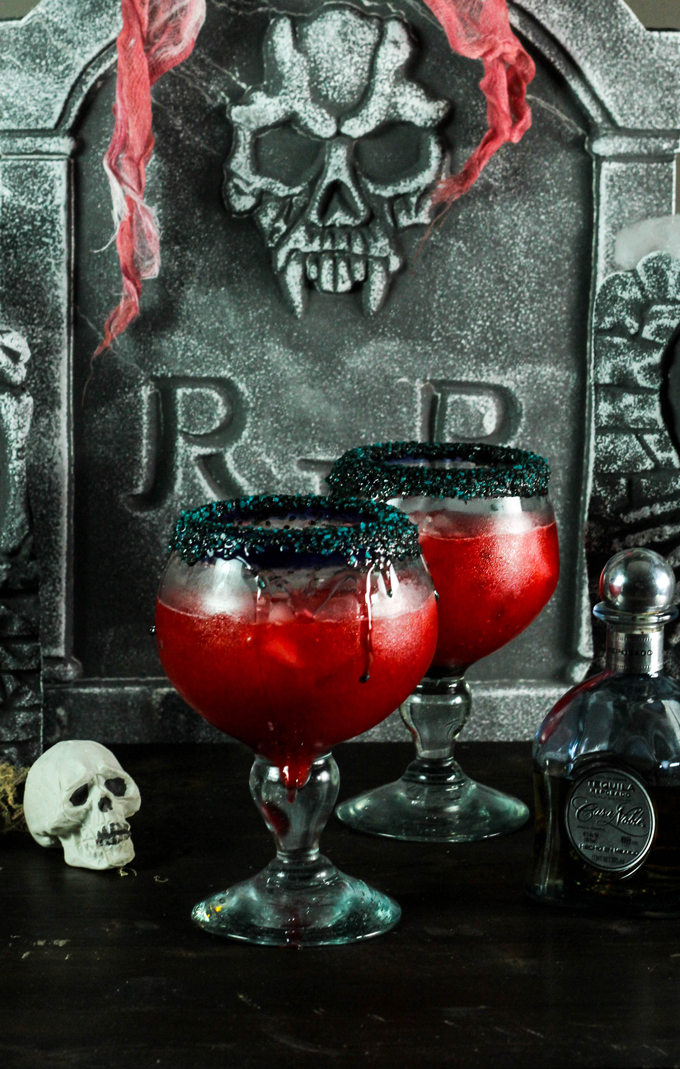 Were doing things a little differently this week.  Halloween is this Friday and we figured we should reverse our week so that all you planners out there would have the time to plan to have this Raspberry Peach Margarita at your party this weekend…

This raspberry margarita is perfect as  your Halloween cocktail this year for a couple reasons.  First, its the color of blood.  Nuf said…  And second, its made with Tequila, Casa Noble Reposado Tequila.  Tequila is made in Mexico where they celebrate the ancient Day of the Dead, rather than Halloween.  Rather than trick or treat for candy at the end of October, many Mexicans and other Latin cultures keep alive a tradition that blends Catholic rituals with the pre-Hispanic belief that the dead return once a year from the underworld.  See!  Blood red Raspberries + Tequila + Mexico + late ancestors + slightly creepy = perfect Halloween cocktail.

That said, you don’t have to wait until Halloween to sample this peach and raspberry margarita.  Its good any time of the year.  Especially in the summer when you can get fresh raspberries and peaches to go with! 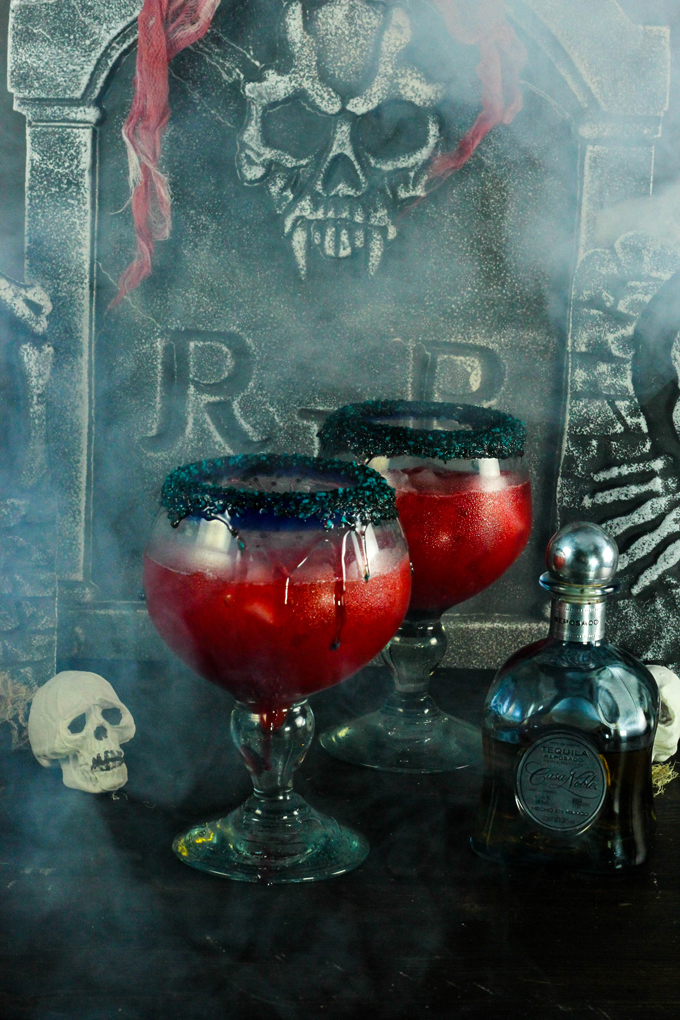 I find the Day of the Dead rituals to be really interesting.  I love history and especially cultural history (history major here) but I didnt know that much about the Day of the Dead until recently.  Before modern day Mexico was colonized by the Spanish, the indigenous people had very elaborate rituals concerning the life and death cycles.  They didn’t view death as the end of life, but rather as the continuation of life and they celebrated this.  During the Colonial era, the Spanish Catholics sought to eradicate these practices as they considered them barbaric and pagan. In their efforts to kill the ritual, they moved the time of the celebrations so it coincided with All Saints Day and All Souls Day (Nov 1 and 2nd) hoping that it would just get integrated and lost over time.

The rituals remained and the Day of the Dead is still celebrated to honor ancestors that have passed on.  People visit the graves of their loved ones, build altars in their homes for the dead and surround them with flowers, food, pictures, and candles.  They bring toys for children that have passed, and Tequila for adults.  Marigolds are a popular flower to adorn the altars and graves with as they are known to be the “flower of the dead” and their scent is thought to attract the souls of the departed and draw them back.

Brightly painted skulls are a symbol of the Day of the Dead, just like jack-o-lanterns are a symbol of Halloween.  This symbol comes from the ancient rituals where the Meso-American peoples kept skulls as trophies and displayed them during the rituals.  They were used to honor the dead and so they are used today as well.  Just not real ones anymore, of course.  The look pretty, but creepy, like this: 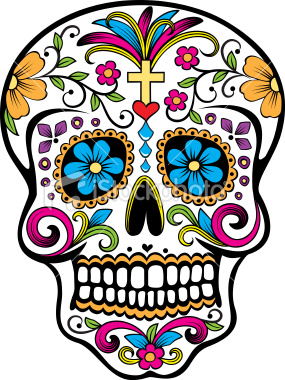 See, isn’t that interesting?  I bet you learned something new.  So in honor of the Day of the Dead, we came up with this raspberry margarita with peaches too  for the occasion.  Along with fitting right into the seasonal traditions, its also really really good!  I have to say that I think Raspberry and Peach is my favorite flavor combination right now. 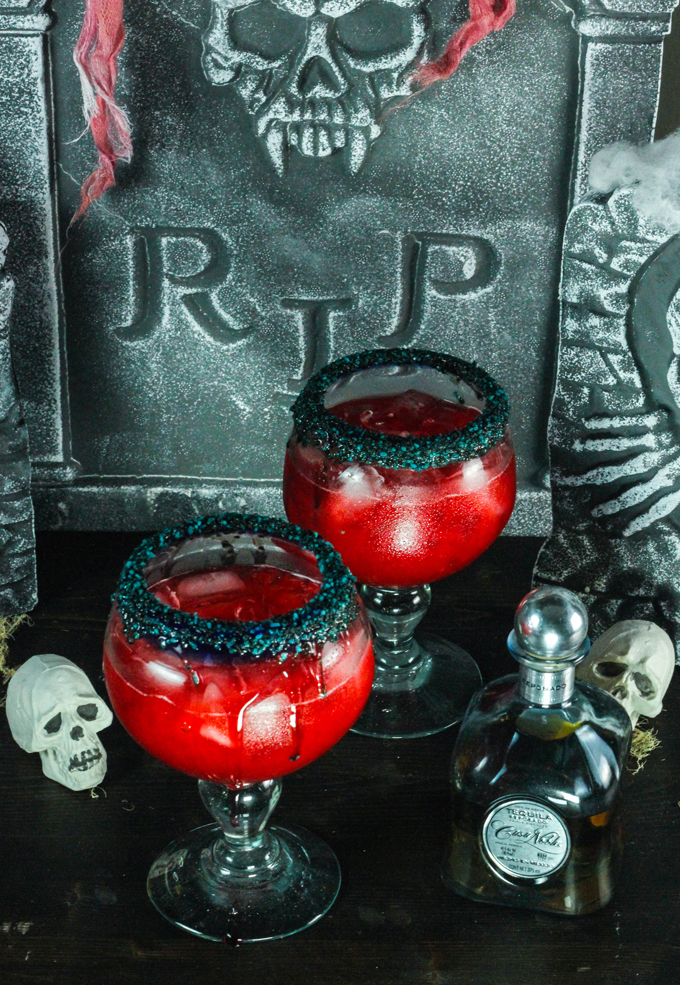 Isn’t it also the most beautifully colored red cocktail ever?  If it didnt look so creepy here, it would be gorgeous.

We recently had the privilege of trying out Casa Noble Reposado Tequila.  We used it to make this raspberry and peach margarita, but we obviously had to try it on its own.  Yes, I did a shot.  Ok fine, it wasn’t really a full shot, more like a large sip lol.  I’m not really down with straight Tequila these days, however I was pleasantly surprised how smooth tasting it was.  I also loved the flavor of it in this Margarita and Debbie, who is a much bigger fan of Tequila than me, really liked it as well.

Casa Noble Reposado Tequila is aged for  364 days in french white oak barrels.  I dont pretend to know much about aging tequila, however I did a little research, cuz thats what I do, and I discovered that Tequila is usually aged in either French white oak barrels or American oak barrels and most commonly, American whiskey barrels.  The wood imparts a smooth flavor to the Tequila and the oils of the wood react with the liquid to create new flavors beyond what the agave tasted like before.

Casa Noble Reposado Tequila has won a number of awards including Best Tequila at the Outstanding Tequilas of the World awards, Gold Medal at San Francisco World Spirits Competition, and many others.  Its definitely worth giving it a try! 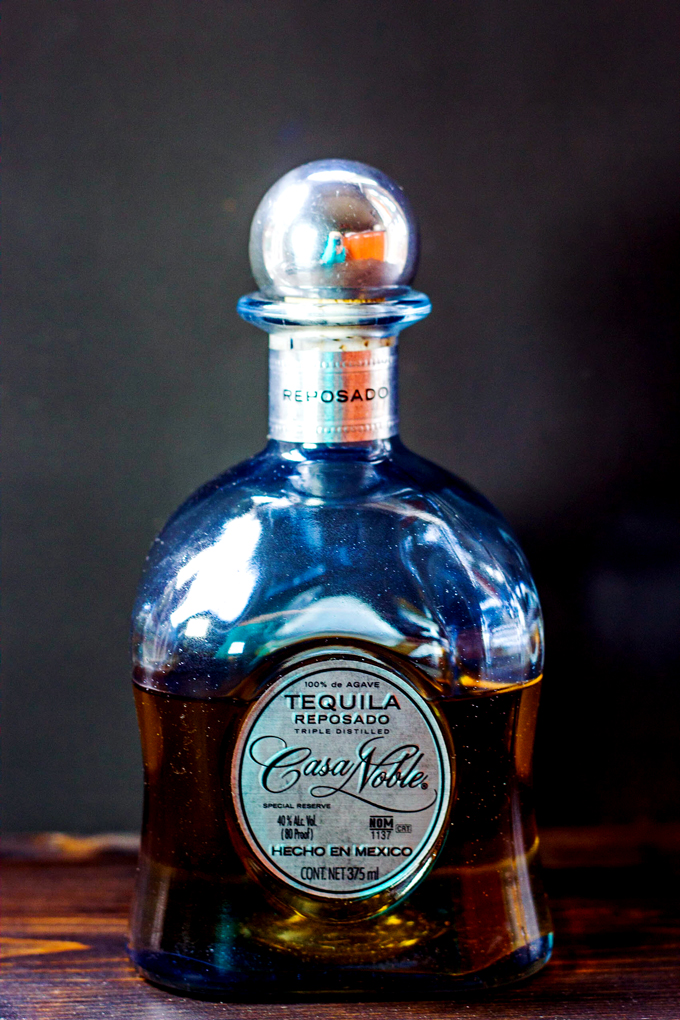 We used raspberry puree for this.  Its a little time consuming to puree the raspberries and then strain them (if you don’t like the seeds in your drink) however, it gives the drink such a bigger raspberry flavor than just raspberry juice alone.  You could do the same with peaches, but it might be too thick, so we opted for peach juice to thin it out a bit.

If you are going to be making a bunch of these, I suggest making the juice by mixing the raspberry puree and peach juice in a pitcher first and then its easy to make each drink by just adding ice, the Tequila and lime juice to each glass and filling it with juice.   Just use a ratio of 1 to 4 for the juice mixture.  1 cup raspberry puree to 4 cups of peach juice.

Hope you love this peach raspberry margarita as much as we do! 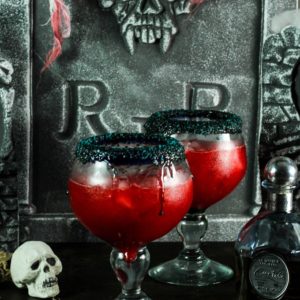