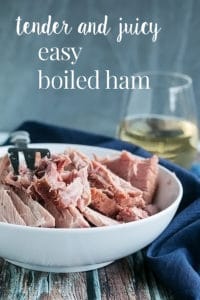 A delicious boiled ham recipe that falls apart and melts in your mouth. This recipe is perfect for special occasions like Easter, Thanksgiving or Christmas dinner or anytime you are feeding a crowd of guests because its easy, doesn’t require a lot of your attention, and it works every time!

Boiled ham is our families favorite way to eat ham.  One because it tastes damn good, but also because its as easy as filling a pot with water, adding some seasonings, a few vegetables and walking away.

The simplicity makes it an awesome dish to feed a crowd of people, and the taste makes it the perfect choice for special occasions.

Boiled ham dinner with scalloped potatoes is one of Kevin’s favorite meals so I like to make it for him once in a while, but I usually do this when we are having guests as well, just because its so good, everyone loves it, and its such an easy meal!

I also get a ton of leftovers when I am boiling a ham so it makes lunches easy and delicious for Kevin and I over the next few days.  I usually pick a big ass ham regardless of how many people were having over just to make sure I have leftovers.

A meal that’s easy for entertaining but also makes my life easier during the week as well is a win win!

Why Boil A Ham?

Boiling is a great way to heat up your ham before serving. This method keeps the moisture in the ham while cooking and therefore, the ham stays tender and juicy. It also adds flavor to the ham when you add aromatic veggies to the pot as well as other flavors like spices or juice.

You can use a couple of different cuts, but the main thing you want is to boil a ham with the bone in.  A picnic ham, country ham, or any dry-cured bone in cuts will work.

You can also use a fresh ham, but you don’t see those very often.  I think they would work really well actually and you would use the exact same method.

Do not try to boil a ham without a bone, I haven’t tried this, but I just don’t think you will get good results.

Is the Ham Already Cooked?

Most hams you buy will already be smoked so yes, it’s basically cooked. But you need to warm it up before eating it and boiling is a great way to do that.

Its honestly so simple. This is all you need to do:

Tips to Make it Perfect

How long do you boil a ham?

A boiled ham should take about 15 mins per pound.  Start with this calculation, but then you can check the ham every once in a while.  If the meat starts separating from the bone really easy, that’s a good indication that it’s done.

You can also check the internal temperature with a thermometer.  If the meat in the middle reaches 135 degrees Fahrenheit then its done.

If you use the temperature method, make sure to wiggle the bones a bit too so you can make sure it’s really tender before you take it out.

Can You Overcook a Ham?

Yes you can. Make sure to simmer at a low temperature and for not longer than necessary. Its harder to over cook a ham when you are boiling it, but it is possible!

Should You Let Ham Rest?

Yes! Always let any kind of cooked meat rest. It allows the molecules to slow down and relax. Then when you cut into it, the juices don’t all run out. Let your ham rest for about 15-20 mins after removing it from the water.

This boiled ham recipe always comes out so dang juicy and tender when its done.  It pretty much just falls apart.  You don’t need any fancy sauce to go with this and we often eat it with plain old mustard, but honey mustard, or apple sauce or apple compote would be yummy too.

Don’t forget to save the bone.  Once you get the meat off, throw it in a freezer bag and into the freezer.  Then later on, make bone broth with it and then split pea soup or some other ham soup with it.  It will make your soup so much better than ordinary broth!

What to serve with your boiled ham dinner:

If you’ve tried this boiled ham recipe then don’t forget to rate the recipe and let us know how it turned out in the comments below.  We love hearing from you!

We love to see your creations!  Tag @Cookswithcocktails if you post a picture of this recipe on INSTAGRAM 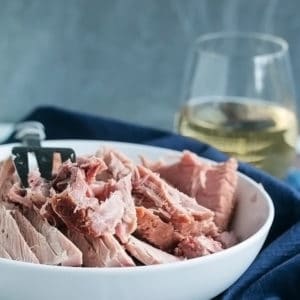