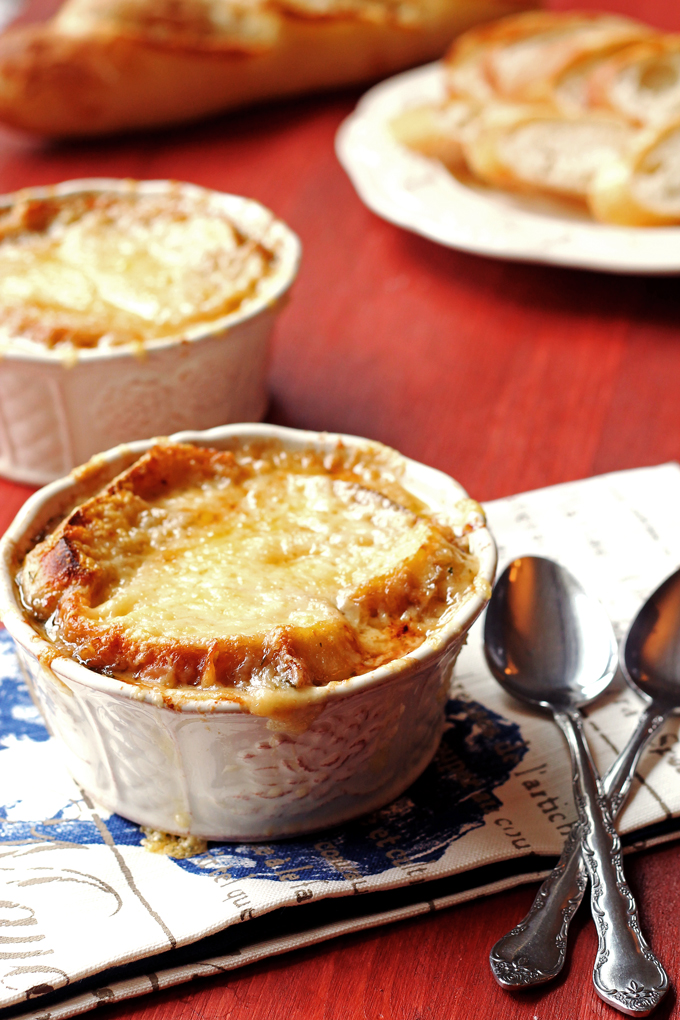 I have three girlfriends that are like my family. Liane, Dayna, and Jenn. We all went to high school together and have been friends for over 20 years now! A while back after we grew up and our lives started to get busy, we decided that once a month we would get together for lunch or dinner to make sure that we have time to catch up.  Sorta reminiscent of Sex and the City lol.  We have slacked a bit here and there on our monthly meet ups, but we have a what app group chat going ALL THE TIME so we always know whats going on in each others lives anyways.  Still, its nice to see each others faces from time to time too.

We are having one of these get togethers this weekend except we will be missing Jenn, who is in Africa still.  (sad face) Liane and I are going to Vancouver to meet Dayna and go for dinner at Cuchillos (a Latin restaurant that has the most amazing taco creations ever) followed by whatever else we feel like.  The plan is to go back to Dayna’s and have some wine after dinner, but I would like to make a prediction that after a glass of wine or two Liane’s shoulders will start to shimmy and we may have to find somewhere we can go dancing for a bit before we go home. Either way, Im excited to have some time with my girls out having some fun. 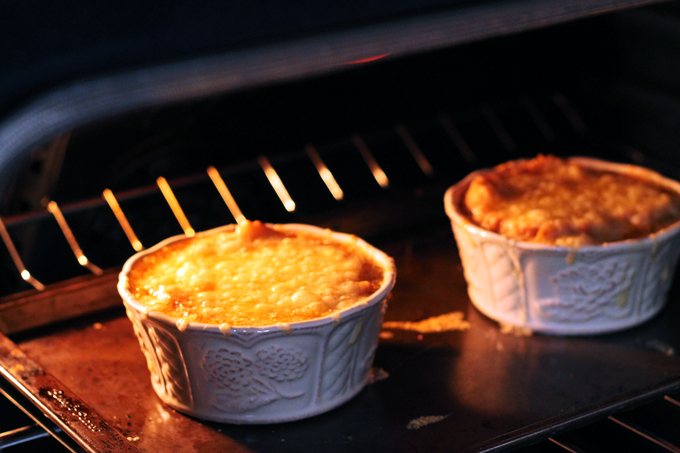 Debbie also often orders French Onion Soup when we go out for lunch. Only, she doesn’t like the soggy bread under the cheese so much so she pulls the cheese off the bread and eats the cheese with the soup alone.  Smart right?  Less carbs too. 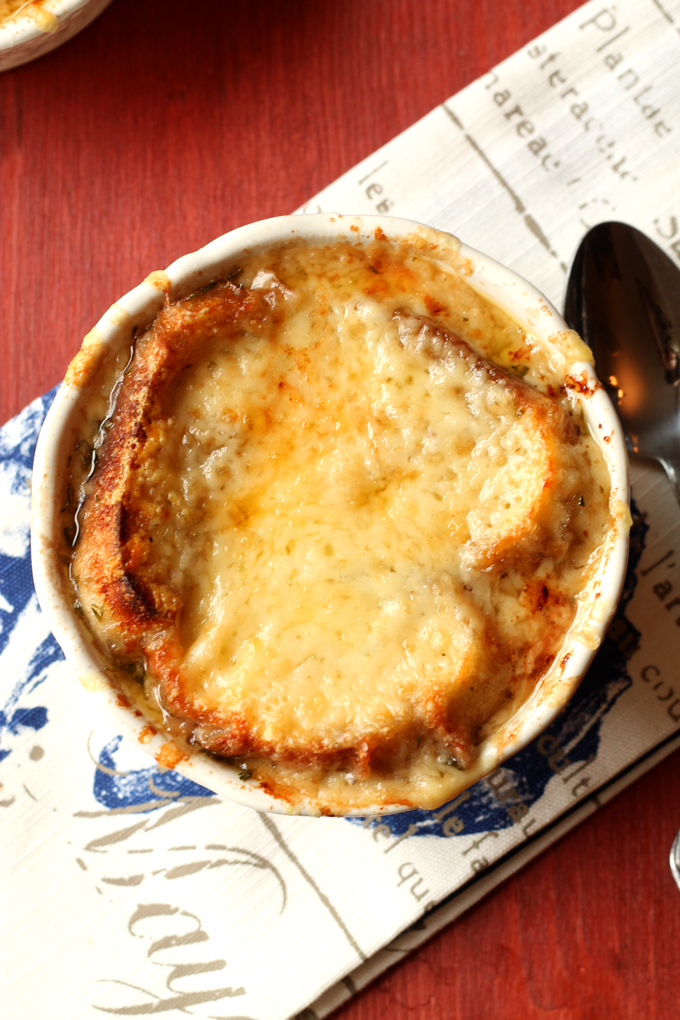 I could just dive into all that cheesiness right now, that looks soooooo good!

A little while ago she told me that she had a fabulous recipe for French Onion Soup, so we decided to give it a shot. I cant even tell you how good it was!  The soup broth is so flavorfull!  You can just taste the hint of red wine in the broth and it has just the perfect amount of thyme.  So good!

When we made this, we kept a close eye on the onions when they were cooking at the beginning. Debbie said that she didn’t like her soup with caramelized onions because it makes the soup sweet.  So we cooked the onions till they were just starting to turn a little brown and then we added the broth.  Its up to you how long you cook  the onions for.  Cook them how you like them in your soup.   I have to say though, her method created the best French Onion Soup I have ever had, so that’s how I will do it from now on. 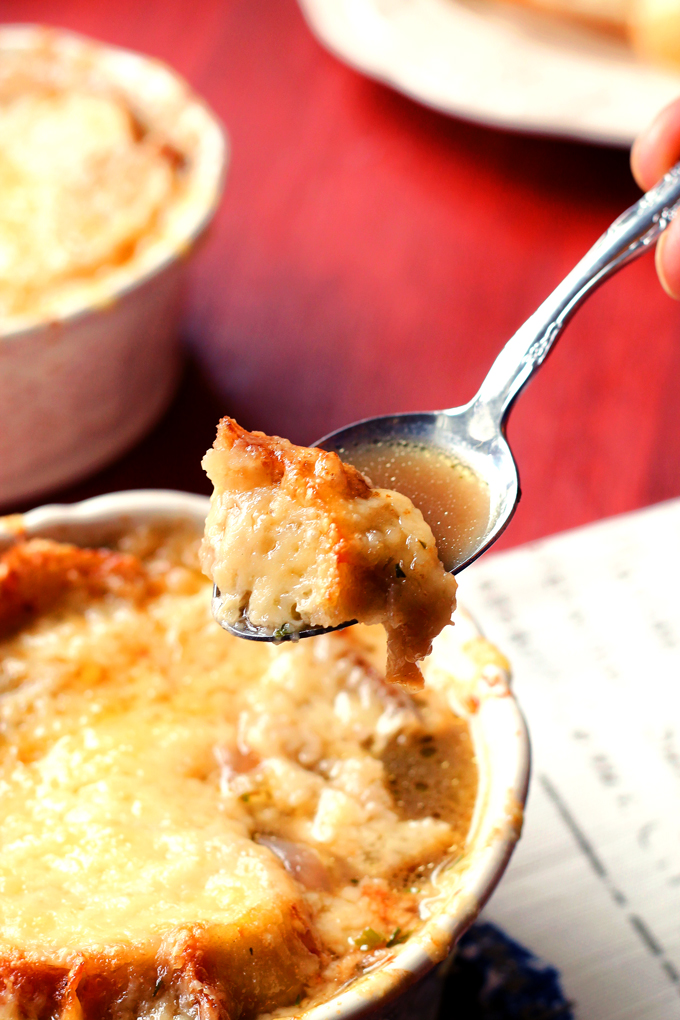 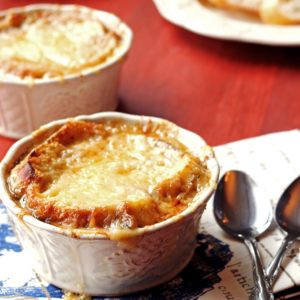