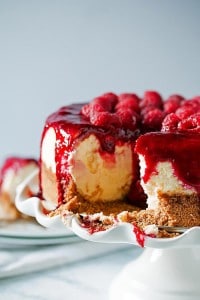 Lemon Soufflé Cheesecake!  Where have you been all my life? 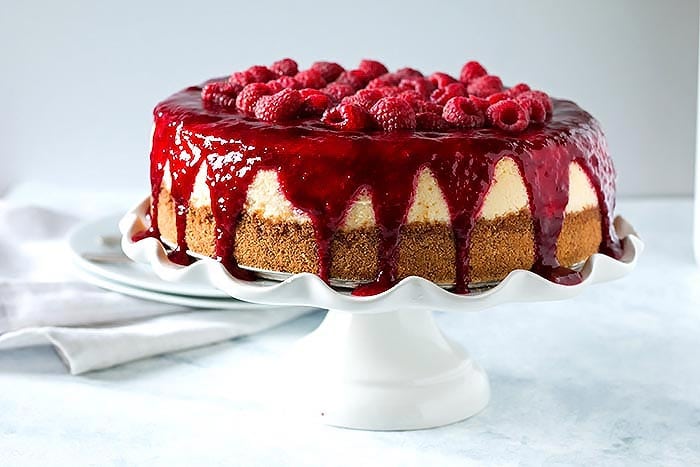 Up until now, the cheesecake recipe that I have always made is Tyler Florence’s Ultimate Cheesecake.  For good reason. Its creamy, cheesy and melt in your mouth amazing.  However, I saw a recipe on Allrecipes.com for a blueberry soufflé cheesecake and was inspired to adapt my favorite recipe into a lemon souffle cheesecake which included adding some nummy things like limoncello, raspberries and a raspberry liqueur sauce and of course, beaten egg whites.  The result was out of this world!  Light as air, cheesy, creamy, lemon soufflé filling topped with a divine raspberry sauce that’s both sweet and slightly tart.

This dessert is dangerous.  Its so light tasting that its easy to eat a big ass piece and not feel it.  It doesn’t sit heavy in your tummy and the lemon raspberry combination is a huge win. 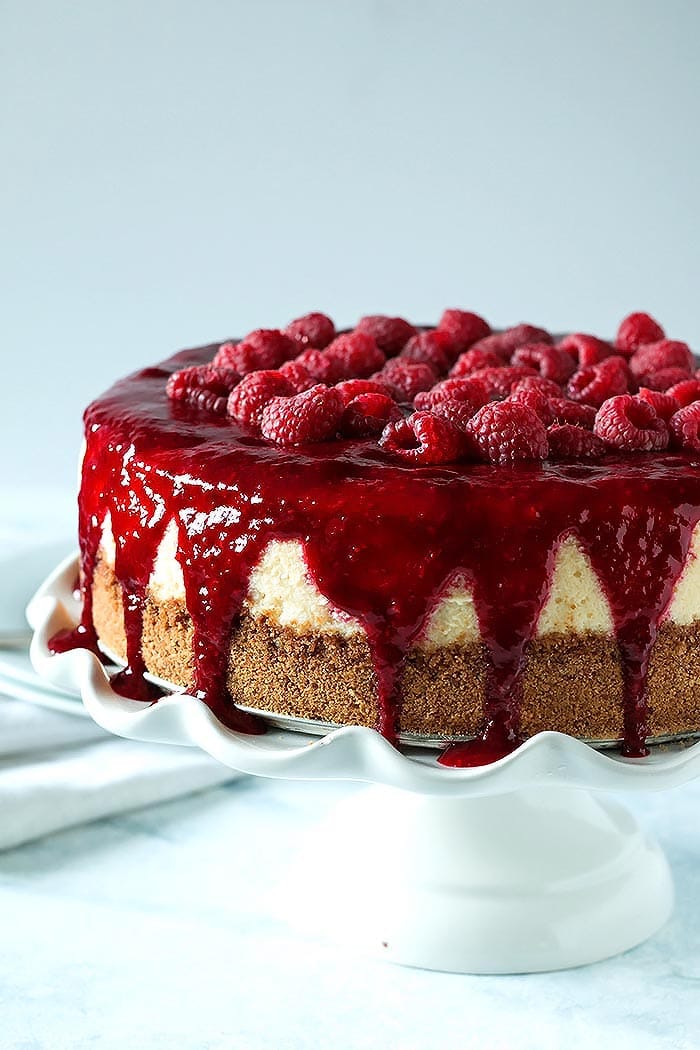 For the topping, I used our homemade raspberry liqueur.  I used a little bit of the liquid, but I used a whole bunch of the raspberries that had been soaking in the vodka for ages.  I mixed those with a few frozen raspberries, simmered it for about 10 mins and then strained at least half of it.  Straining raspberries is a pain, I KNOW.  But otherwise you get all those seeds in your sauce which I really don’t care for.  A smooth sauce is so much nicer for this lemon souffle cheesecake.

Cheesecake recipes often call for being baked in a water bath, but I have to be honest, I never do this.  Its too finiky and I found that my cheesecake sometimes cracked on the top anyways.  So now I just put a separate pan of hot water into the oven with the cheesecake and it does exactly the same thing.  Sometimes it cracks, sometimes it doesn’t.  And if it cracks, it really doesn’t matter if you are putting a topping on it anyways.

This lemon souffle cheesecake is the ultimate dessert for any dinner party or celebration you might be hosting.  Not only does it look impressive, there is not a single person in this world that wouldn’t rave about it as soon as they get their first bite in their mouth.  I literally had people fighting over the last piece and it was their second… 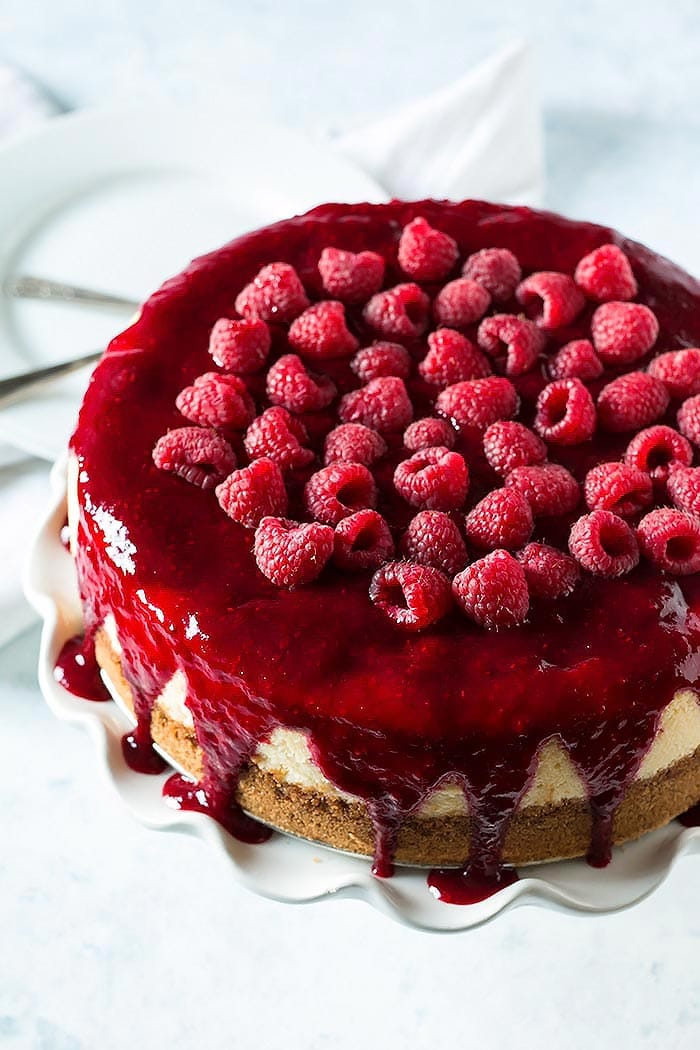 I have some exciting news!  I don’t know why I haven’t written about this before because its been in the works for the last couple months…   I am going to Peru!  Right now.  Today.  I’m just finishing up this post and Kevin is driving us to the airport.  I’m going with my daughter, Jessica.  She is graduating from high school this year in June and this trip is her graduation present.  It’s also an awesome excuse to spend some quality time with my girl.  If any of you are parents of teenagers, you know that after they get their own wheels you hardly see them anymore! 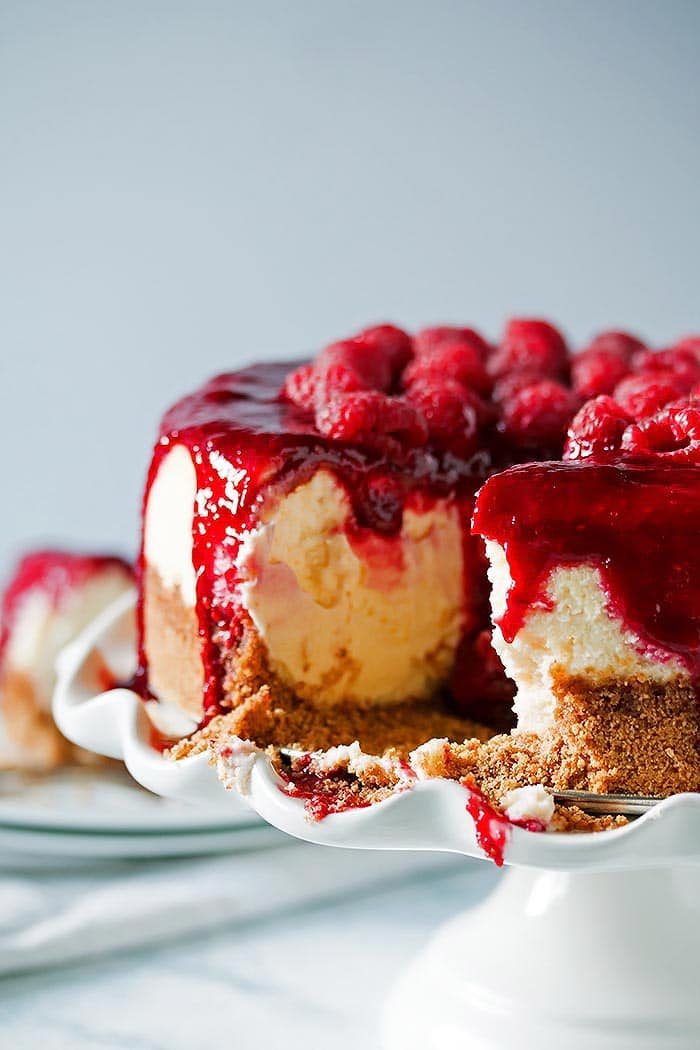 The next 17 days is going to be full of adventure!  We land in Lima tomorrow, from there we fly to Iquitos which is deep in the jungle where we will stay at a jungle lodge and look for pink dolphins in the Amazon river.  From there we fly back to Lima and on to Cusco where we will hang out for a few days checking out ruins and restaurants and pubs.  Then we are journeying to Machu Picchu which has been on my bucket list since I got interested in archaeology and anthropology back in university.  Everyone I know who has seen it, says that its absolutely breathtaking!  We finish off our trip back in Lima where we will also celebrate Jessica’s 18th birthday!  I am so excited to experience Peruvian culture, amazing scenery and sample tons of new food! Doing all that with my girl is going to be so special. 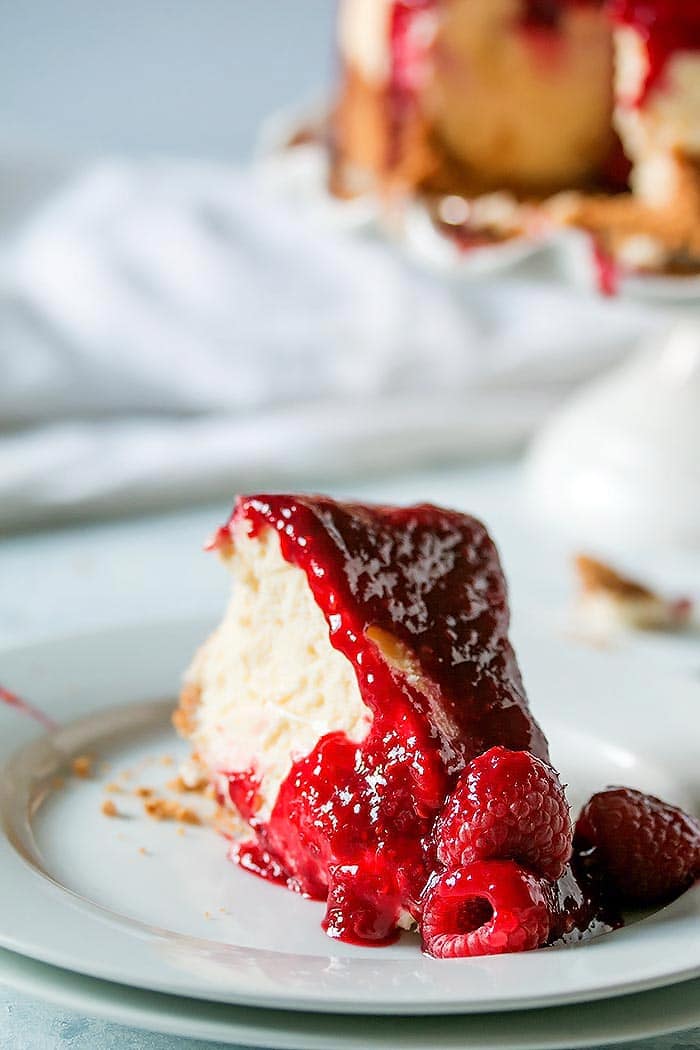 Unfortunately I wont be updating the blog while I’m gone.  Packing around my laptop isn’t part of the plan this time… However, I will be posting some updates on Instagram and I will, no doubt, have some stories to share with you when I get back.  You can follow along on instagram @cookswithcocktails.

See you in a couple weeks! 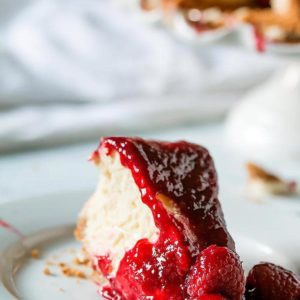